An event we would like to highlight coming up on September 28th is the Hickory Stick Tournament. This will be the 1st event of its kind held here at the Bath Golf Club. Hickory Golf is a tradition that this course was built on & is a growing society across New England gaining much traction over the years. We encourage our members & guests to participate in this great event or to come out & see some of the action.

Maintenance has taken many steps to ensure that going into the 2020 golf season, the greens and tees will be in premier shape.

The weather will be great for the next few weeks, & we will continue these efforts to ensure a great outcome. We hope to see you out here next year!

Learn more about the members that make up our golf family!

“Paul Paul” Raymond, has been a beloved member here at the Bath Golf Club for 20 years. In between costume changes, Paul plays in the weekly Colonial Club League, throwing bags in the off-season corn hole league, & enjoying the many member “money games”.

Paul is a huge supporter of the course both on the greens and on the porch. In his time away from the course, he is a proud father of 3 beautiful girls; Kelsey, Allison, & Carly, & a wonderful husband to his wife Karen. He coaches Mt. Ararat/ Lisbon/Morse Varsity Ice Hockey & has worked at Bath Iron Works for 40 years.

He always makes sure that nobody gets too “scurvy”, & makes us all feel like a friend. Thank you Paul, for always making us laugh & your continued support of the Bath Golf Club.

Fall Cup 2019 was a roaring success this year! After play concluded, we held our shootout to determine our Overall Champion. With the top two teams from each flight, along with our wild card team, we competed in a 4 hole playoff, with the highest scores being eliminated on each hole. It was a shootout for the ages with our final two teams, Flight 2 winners Don Shiminski and Mark Metcalf meeting our Wild Card team of Brandon Clark and Kevin Crosman on the 9th Hole and final hole. After 4 rounds of intense sudden death action, Brandon Clark and Kevin Crosman emerged victorious! Congratulations to our new Champions, and a giant thank you to all who participated. It was a truly great weekend!

GIVE BACK TO THE COMMUNITY WITH US!

Every Tuesday in September, we will be donating 10% of our green fees & 10% of our food sales to Oasis Free Clinics!

Oasis Free Clinics are the only clinics in Midcoast Maine offering free medical & dental services to those who have no health insurance & cannot afford to pay for care. They believe all people should have access to quality health care regardless of ability to pay, & an opportunity to prevent & treat health problems before they become serious & costly emergencies.

Book your tee time today to help us support this great organization! 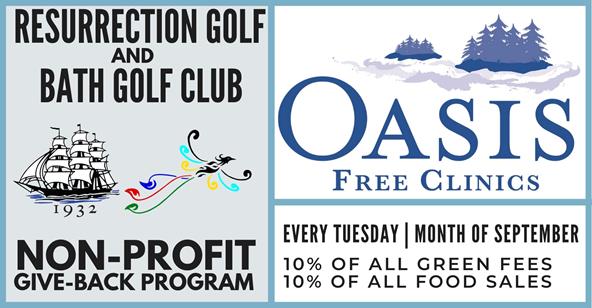 Beginning this week, please be aware of our updated Fall Hours.

Please join us for our Final Prime Rib Dinner of the Summer! We have enjoyed having all of you out here during the beautiful summer days to enjoy Aaron’s famous Prime Rib with all the fixings. This week, we will be offering our special dinner for $20, still to include salad, sides, & delicious dessert, & $5 glasses of house wines. As always, we will still have our full menu available.

Thursday | Ladies Day | 10% off food & drinks for all ladies

See what’s new this week at The Bath!
Scroll to top